It evolves from Raptorch starting from level 29. It can Mega Evolve into Mega Archilles using the Archillesite.

Along with Metalynx and Electruxo, Archilles is one of the fully-evolved Starter Pokémon of the Tandor region, able to be chosen at the beginning of Pokémon Uranium.

Archilles is a large, fierce-looking raptor Pokémon, based on the achillobator species and a giant armadillo. Its body is black with an orange underbelly, and it has hard red plating on its head and a curved shell on its back. Its forepaws have large, orange, shovel-like claws that can be used for digging. It has fire coming from many places on its body: behind its head, from its elbows and hind legs, and from the end of its tail. Its tail has pink feathers on either side and a fan-like grouping of feathers on the end. Its hind legs have large, curved talons, and its mouth is full of very sharp teeth.

As Mega Archilles, the tufts on its face transform into a headdress-like arrangement of feathers. Several additional feathers grow from its elbows, calves and its tail, making the tail look more akin to that of an archaeopteryx. The flames on its head and tail increase in size, its teeth and claws become longer and spikes now protrude from its forehead and back.

Archilles has many weapons at its disposal: its sharp teeth and claws, its speed, its armor, and its fire breath. It is able to engulf itself in flame and charge head-first at the opponent, dealing incredible damage. The fire coming from all over its body means that any attackers who make physical contact may suffer serious burns. Its incredible speed allows it to outrun opponents and sidestep attacks with ease. However, its one weak point is that it is somewhat frail when attacked on its softer underbelly. Archilles are fierce Pokemon that can only be controlled by an experienced trainer. They are fiercely loyal to trainers that raise them from a Raptorch, but tend to be distrustful of anyone else. Although they are a proud Pokemon, if the trainer has a very close bond with their Archilles it will allow them to ride on its back.

Archilles are solitary, territorial Pokemon that live in the foothills of mountains. They are apex predators, as very few Pokemon are strong enough to take down a fully-grown Archilles. They abhor water, however, and will immediately panic and seek shelter when it rains.

Archilles is primarily based on a velociraptor, specifically the Achillobator, and an armadillo.[1] As its Pokédex entry states that it can be ridden, and its shiny form has a green, red, and white color scheme, it may also be based on Yoshi from the Mario games.

Archilles is a combination of armadillo, achillobator and Achilles (Greek hero of the Trojan War).[2] 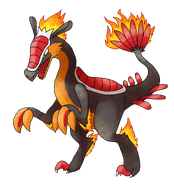 Back Archilles animated
Add a photo to this gallery
Retrieved from "https://pokemon-uranium.fandom.com/wiki/Archilles?oldid=74944"
Community content is available under CC-BY-SA unless otherwise noted.