Astronite is a dual-type Rock/Psychic Pokémon.

It evolves from Cometeor through trade. It is the final form of Comite.

Astronite has shed most of its rocky exterior from its earlier forms, revealing a dark body beneath. Its right arm is divided in several sections and held together with psychic power.

While they are able to survive virtually anywhere, their practical non-existence in Tandor wildlife is due to the levitating capabilities they gained from their earlier evolution, Cometeor. The majority of wild Astronite have already flown off into space for exploration.

Astronite is genderless, it can't get any of the Egg Moves listed through natural means (unless learnable elsewhere such as via a Mystery Gift event, TM, and/or Move Tutor).

Astronite comes from astronaut and meteorite. 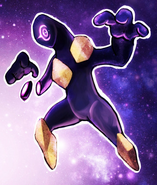