It evolves from Baaschaf starting at level 44. It is the final form of Baashaun. It can Mega Evolve into Mega Baariette using the Baariettite.

Baariette is a bipedal ram Pokémon. Its fur is dark gray in color, with blue markings on its hands, belly and snout, which is short and square-shaped. It has two red eyes with white pupils, and a pair of curled yellow horns on its head, two arms with three yellow claws on each hand, and yellow cloven hooves. It has thick black wool which covers the top of its head, wraps around its neck and runs down its back, ending in a large fluffy tail, giving it the appearance of a cape. Baariette are experts at fighting dirty and like to ensure they defeat their opponents once and for all. They live in lowlands plains, watching over their pre-evolutions.

As Mega Baariette, its previously streamlined body becomes much larger and bulkier, with its snout becoming longer and more rounded. Its limbs become thicker and it gains a metal ring around each wrist and ankle. It also gains a yellow zigzag stripe surrounding each of the blue patterns on its limbs, as well as a star-shaped marking on its torso. Its claws become longer, and its two curly horns are replaced with four horns, one pair being a smaller U-shaped pair and the other pair being longer and corkscrew-shaped. Its fur gains tufts on its elbows, and its thick black wool is now more ragged and ends in a larger tail.

Like the previous members of the line, Baariette is based on a black sheep, both literally and in reference to the common British idiom.

Mega Baariette may be based on a demon. Due to the shape of its horns and the pentagram-like emblem on its chest, Mega Baariette may be inspired by goat demon Baphomet. It may also be a reference to The Lamb, a demon that appears in the indie roguelike game The Binding of Isaac, judging by their horn shapes and the fact that a lamb is a baby sheep. 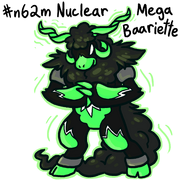