It evolves from Baashaun starting from level 22 and evolves into Baariette starting at level 44.

Baaschaf is a bipedal sheep Pokemon. Like its pre-evolution, its grey body is covered with fluffy black wool. It has curled golden horns from its head. Its hooves are cloven as well, and it has red eyes.

Now that Baaschaf is able to stand on its own two feet, it a more adept and versatile fighter than its pre-evolution. Its strongest attack is a kick from its hind legs, followed up with a furious headbutt.

Although Baaschaf are still fighters, they are slightly more rational in picking their fights than their pre-evolution Baashaun. They main goal in life is to become stronger, and they live in groups where the strongest rules.

Baaschaf are found in low grasslands and plains areas. They are also raised by farmers around the Wheatfields, since their dark wool is prized by some artists and collectors.

Baaschaf may come from baa, the sound a sheep, goat, or lamb makes, and a corruption of mischief spelled with an 'a', due to its playful nature. Baaschaf's name also comes from the German word schaf, which means sheep. 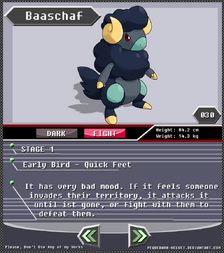 Original Artwork of Baaschaf by Pequedark-Velvet on DeviantArt.
Community content is available under CC-BY-SA unless otherwise noted.
Advertisement