Baashaun is a sheep Pokémon covered in fluffy black wool. It has yellow horns on its head and cloven yellow hooves. It has red eyes and a generally angry expression.

Baashaun are skilled fighters and will use their low center of gravity to trip opponents up. They will then charge forward and gore attackers with their horns or kick them in the face.

Baashaun love to fight and will always pick fights with other Pokémon, however, they seldom play fair. Trainers walking in their territory late at night may find themselves jumped by a whole herd of Baashaun. They often will appreciate being captured by a trainer because it gives them an excuse to battle.

Baashaun live on lowland plains close to the sea, in herds of approximately 20 individuals. They are herbivores.

Baashaun appears to be based on the concept of a black sheep, both literally and in reference to the common English idiom.

Baashaun's name is a play on words with the words "bash on" or baa, the noise that sheep make, and Shaun from the fictional character "Shaun The Sheep".

It may also be a reference to Bashan, a place of evil, and then later of grazing pastures. 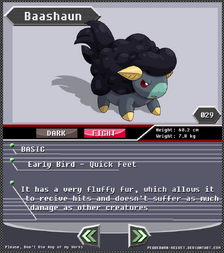 Original artwork of Baashaun by Pequedark-Velvet on DeviantArt.
Community content is available under CC-BY-SA unless otherwise noted.
Advertisement