Barewl is a small, spherical Pokémon of ambiguous biological origin. It has a round, brown body made of extremely heavy metals. It has two stubby legs and a tail, but no arms. On its head is a steel mantle with three spikes, and the topmost spike has a wire coming out off it. Barewl has two beady black eyes and no discernible mouth.

Due to their incredible weight and density for their size, Barewl can repel attacks with ease. They can also curl up into a ball and roll, mowing down their opponents.

Barewl are stalwart Pokémon who will never flee from a fight. They are obedient and non-aggressive, making them a good Pokémon for beginners. However, they are not particularly bright and can be easily tricked by a more intelligent opponent.

Barewl are subterranean Pokémon, inhabiting caves and tunnels where they feast on the metal ores embedded in rocks.

Barewl's design could be based on a variety of things, such as an anvil, a dumbbell or a barrel. The single hair and Metal Whip move, which is specific to the Barewl line, could be inspired by barbed wire.

Barewl may be a combination of bar (probably iron bar), roll, brawl, barrel and ore. 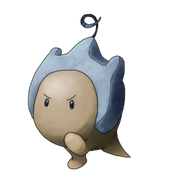 Add a photo to this gallery
Retrieved from "https://pokemon-uranium.fandom.com/wiki/Barewl?oldid=69855"
Community content is available under CC-BY-SA unless otherwise noted.