It evolves from Masking starting from level 42. It can Mega Evolve into Mega Dramsama using the Dramsamaite.

Dramsama is a bizarre-looking Pokémon that resembles a bird in appearance, although due to its powerful illusions it can disguise itself as anything it wants. Its head is flat white on either side with a black stripe running down the center. The ruff that was around its neck as a Masking has developed into a red coat with a fluffy trim. On its head and tail are crowns of multicolored feathers which each have eyespots on them.

A powerful Psychic-type, Dramsama is noted for its ability to project illusions and its ability to influence dreams. It is notorious for trapping its victims in a permanent sleep, stealing their soul to add to its tail feathers.

Dramsama are inscrutable, mysterious, and dangerous. They have powerful memories and will remember those who have wronged them in order to exact their revenge with deliberate force. Their minds work in a way that's dramatically different from humans so their trainers often have difficulty understanding them. Few trainers are capable of forming a strong bond with this Pokémon; one of the only ones known to have done so is the Venesi City Gym Leader.

Dramsama are very rare and are generally only seen in captivity. Those that do live in the wild tend to live around cities, where there are plenty of fresh souls for them to steal.

Dramsama is based on the character The King/Ousama from Hatoful Boyfriend Holidaystar. It was designed & sprited by Involuntary Twitch.

An explanation behind the designs of Masking and Dramsama can be found here.

Dramsama comes from drama and Ousama. 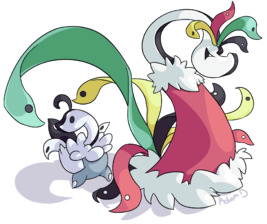 Artwork of Masking and Dramsama made by Adam Dreifus (http://adamdreifus.tumblr.com/)%7Clink=http://boltbeam.tumblr.com/post/60760523076/commission-for-oripoke-of-her-pokemon-masking 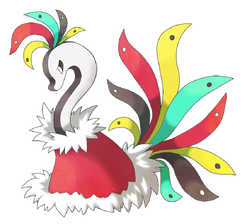