It evolves from Eletux starting from level 27. It can Mega Evolve into Mega Electruxo using the Electruxolite.

Along with Archilles and Metalynx, Electruxo is one of the fully-evolved Starter Pokémon of the Tandor region, able to be chosen at the beginning of Pokémon Uranium.

Electruxo is a large, quadrupedal amphibious creature that somewhat resembles a horse in anatomy. It has blue, hairless skin with a white underbelly, and it has yellow lightning-bolt marks on its sides. It has yellow fins on its head, back and legs. Its tail resembles a shark's. Its feet are yellow and end in points. It has red eyes with lightning-bolt marks over its eyelids. When charging up its electrical abilities, all of the yellow parts on its body glow.

As Mega Electruxo, red algae-like appendages sprout from its head and rear. Its dorsal fin becomes more defined, and its limbs and tail are streaked with red. Its eyes are also changed, with the sclerae turning black and its irises becoming white and pupilless.

Electruxo's magnetic field is so strong that it is able to stand, walk, and run on water with ease. It exhibits masterful control over electricity and is able to deliver a strong shock to its foes. Additionally, it is a swift swimmer and able to hold its breath for quite a long time underwater. A quiet, somewhat reserved Pokémon, Electruxo are nevertheless very loyal to their trainers. They are the gentlest of the three starters, but they won't abide inexperienced trainers. They dislike conflict and prefer to paralyze attackers and escape rather than fight, but they will not abandon their friends when they are in need.

Electruxo are solitary creatures, only congregating once a year in their ancestral breeding pools to find a mate. They prefer freshwater lakes, where they hunt for fish Pokémon by discharging a pulse of electric energy into the water and eating their prey when it floats to the surface. 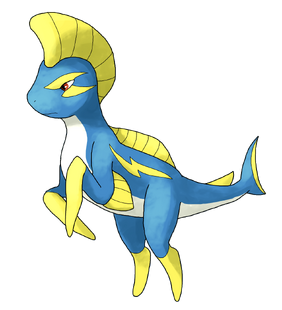 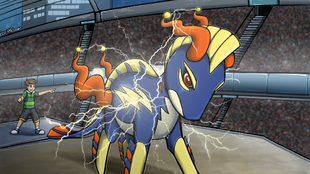 Another early sprite of Electruxo 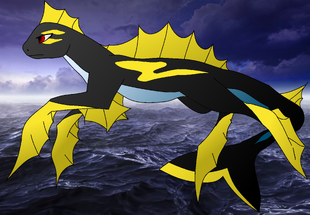 Artwork of shiny Electruxo by 13579b 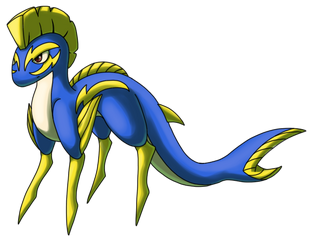 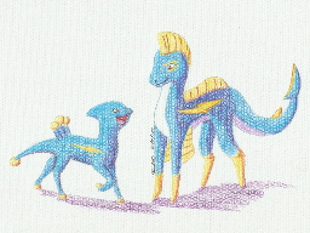 Credits artwork
Add a photo to this gallery

Electruxo is based off of a hippocampus, a rainbow-hued aquatic beast from Greek Mythology.

Electruxo may be a combination of electric, lux, flux and empuxo, a Portuguese word that refers to a force in hydrostatic physics.

Retrieved from "https://pokemon-uranium.fandom.com/wiki/Electruxo?oldid=77246"
Community content is available under CC-BY-SA unless otherwise noted.