Empirilla is a Fighting-type Pokémon.

It evolves from Primeape when leveled up while holding a Jungle Crown. It is the final form of Mankey.

Empirilla is a large, bipedal monkey Pokémon. It has brown, furry hair all over its body, including a dark ruff around its neck. It has pointed ears and a pig-like snout. Its tail is long and curly. It has gold ornamentation on its body: golden cuffs on its wrists and a golden crown on its head. It has tusks protruding from its lower lip, one of which is capped in gold.

Female Empirilla have a jewel on their crown.

Empirilla, in addition to their mighty physical strength, have a much greater degree of intelligence and control than their pre-evolutionary stages. When it flies into a berserk rage, however, it is unstoppable.

Empirilla have gained a sense of nobility and leadership upon evolution, and their crown compels other Pokémon to follow in their lead.

Empirilla comes from empire or emperor and gorilla. 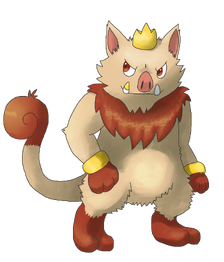