It evolves from Dearewl at level 32. It is the final form of Barewl.

Gararewl is a huge, quadrupedal animal not unlike a giraffe in size and stature. Its body is infused with metal, and it has steel panels on its knees, back, and head to deflect physical attacks. It is covered in fine yellow hair that is actually metal wire. It has a steel mantle on its head and a larger one on its back; each has three spikes that can be used to attack opponents. The largest spike on its head has a long metal wire trailing from it that can be used to whip enemies into submission.

Gararewl's massive size and iron constitution make it difficult to take down. Because it has lost the impurities that were present in its metal before evolving, it is sleeker and has fewer weaknesses than when it was a Barewl. It can crush opponents beneath its hooves, cut them with its tail, ram them with its sharp horns, or use its signature move and whip them into submission.

Gararewl have very few natural predators, as few Pokémon are well-enough equipped to take them down. It is a peaceful Pokémon that bears no ill will towards humans, and therefore can make a good steed.

Gararewl are too large to stay in caves, so they are found in the slopes of mountains, digging into cliff sides using their horn in order to extract ore and minerals which they eat. 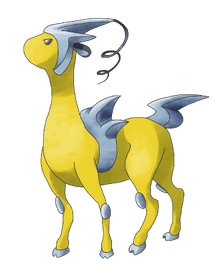 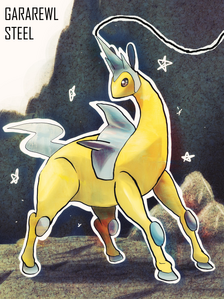 Gararewl is likely based on a giraffe. It also takes design cues from deer, as with its previous evolution, Dearewl.

Gararewl is probably a combination of gear, giraffe, ore and jewel.