Garlikid is a dual-type Grass/Fighting Legendary Pokémon. It is not known to evolve into or from any other Pokémon.

A special Garlikid will join the player's party at the end of the Garlikid Sidequest.

Garlikid is a bipedal green Pokémon resembling a small humanoid with a somewhat muscular build. The appearance of its head appears to be based upon the bulb of the garlic plant, its cape being based upon the leaves. They are both beige in colour. The head also has two small black eyes.

Garlikid is a strong Pokemon, able to deliver powerful punches.

It is somewhat of a vigilante as it seeks to free all Pokémon from the control of cruel and greedy humans, and is untrusting of humans as a result.

Garlikid is rumoured to reside somewhere deep in the mountains of Tandor.

Garlikid appears to be based on a humanoid superhero, with a garlic bulb as its head and garlic leaves as its cape.

Garlikid comes from garlic and kid. 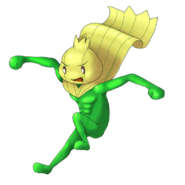