Gyarados is a dual-type Water/Flying Pokémon.

It evolves from Magikarp starting at level 20. It can Mega Evolve into Mega Gyarados using the Gyaradosite.

Gyarados is a serpentine Chinese dragon-like Pokémon. It is mostly blue, with a yellow underbelly and yellow spots along its body. It has a three-pointed, dark blue crest on its head and four white, dorsal fins. Its mouth is very large and gaping, bearing four canine teeth. It has one barbel on each side of its face. The barbels are white on a female and the same color as the main body on a male. Gyarados's tail fin is similar in structure to the crest on its head, except with a thin, white fin spread between the points.

Mega Gyarados is bulkier than its previous form. The fins on its face, its barbels, and its crest are now considerably longer. A large spike extends downward underneath its chin, and it now has a black underside. The yellow spots along its body are replaced by raised red scales that run down its side with a single red stripe below them. Two large white fins appear on its back, similar to those on its face. Most of the other fins along its back disappear, except for the one near the tail. Instead, it now has four white, pointed fins near is tail: two on its back and two on its underside.

Its fangs can crush stones and its scales are harder than steel. It's extremely dangerous, since it's very vicious and violent. It appears when humans begin to fight and destroys everything and everyone around it with intensely hot flames.

Gyarados is infamously known for its fierce temper and wanton destructive tendencies, and is attracted to violence. In addition, Gyarados is also notoriously difficult to tame even after it is captured by the Trainer, usually requiring an exceptional amount of work in taming it until it can obey its trainer.

Gyarados usually lives in large bodies of water, such as lakes and even seas and oceans.

(from Bulbapedia:) It appears to be based on a sea dragon or sea serpent and chinese dragon. Gyarados is partially based on a legend about how carp that leapt over the Dragon Gate would become dragons. Several waterfalls and cataracts in China are believed to be the location of the Dragon Gate. This legend is an allegory of the drive and efforts needed to overcome obstacles (which can be tied to the fact that Gyarados' pre-evolution, Magikarp, could possibly take a lot of drive and effort to legitimately evolve into Gyarados).

Its Flying type may be a reference of koinobori, a carp-shaped wind sock traditionally flown to celebrate the Children's Day in Japan, formerly called Tango no Sekku (端午の節句).

(from Bulbapedia:) Gyarados may derive from 虐殺 gyakusatsu (massacre/slaughter) or 逆境 gyakkyō (hardship/adversity)—both words relate to the creature's violent nature and the hardship it experienced before evolving. In addition, 逆 gyaku means "reverse" or "contrary", possibly referring to how Gyarados evolves from a pathetically weak Pokémon to one capable of destroying entire cities, and, in legend, how the carp goes against the flow of the waterfall in order to reach the top. It may also involve 嵐 arashi (storm) or 争い arasoi (conflict, referencing on how it appeared during wars). The last part may be from ドス dosu (onomatopoeia for the piercing of flesh, again owing to Gyarados' violent nature). Alternatively, dos (Spanish for two) may indicate that it is the second in its evolutionary line. 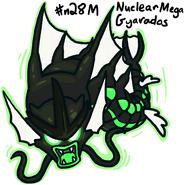