It evolves from Tricwe when leveled up while knowing Wild Charge, learned at level 22.

Harylect is a large bee-like Pokémon. It has a fluffy yellow and brown thorax and a large yellow abdomen that resembles a light bulb. It has two large blue eyes on the sides of its head and two small eyes on the front of its head. Its legs are blue with yellow tips as well as its antennae. Its head is yellow and brown with small blue pincers.

Harylect is based off an ant. It also draws inspiration from spiders and lightbulbs. It may also be based off fireflies or glowworms.

Harylect may be combination of one or more of hairy, electric and insect. 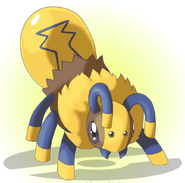