It is not known to evolve into or from any other Pokémon.

Hazma is a small rounded Pokémon, with light green spikes running down its back and tail, making it appear somewhat dinosaurian. Its body resembles a yellow hazardous materials suit, with a face resembling a respirator or gas mask, and a zipper-like marking running down its stomach. It has two stubby legs, the feet of which are green.

Hazma is one of the few stable Nuclear types, the others being Nucleon and Urayne. Its leaded skin makes it immune to nuclear radiation.

In the aftermath of a nuclear accident, groups of Hazma will appear and feed on the radioactive gas, eventually cleaning the air of the area over time. 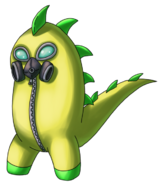 Hazma is based on hazardous material removal workers and the suits they wear.

Hazma is a corruption of hazmat (short for hazardous material).