It evolves from Chyinmunk starting from level 14.

Kinetmunk is a quadrupedal rodent Pokémon. Its fur is yellow with blue markings. Its tail is blue and in a zigzag shape. It has buck teeth and a goofy expression.

Kinetmunk can gather static electricity when they run and discharge it to temporarily stun an opponent. They can also dig tunnels with surprising speed.

Kinetmunk are cowardly Pokémon who would rather run than fight. However, they are easily raised by even beginner trainers, and this, in addition to their relative harmlessness, makes them a common Pokémon for novices.

Kinetmunk live in communal tunnels underground, with many others of their kind. The more that gather together in one place, the greater the static buildup. Lightning often strikes the mounds where they make their homes. 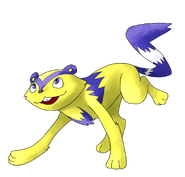 Kinetmunk animated
Add a photo to this gallery

Kinetmunk is based on a chipmunk.

Kinetmunk is a combination of kinetic and chipmunk.

Retrieved from "https://pokemon-uranium.fandom.com/wiki/Kinetmunk?oldid=77443"
Community content is available under CC-BY-SA unless otherwise noted.