It evolves from Lombre through the use of a Water Stone.

(From Bulbapedia) Ludicolo is a bipedal Pokémon that appears to be a mixture of a pineapple and a duck. There is a green sombrero-like growth on its head that is similar to a lily pad. Growing out of the top of its head is a short brown stem with a yellow spiky upper portion. It has black eyes surrounded by a patch of green and an orange bill. Its body is covered with shaggy yellow fur and has several, zigzagging brown stripes. It has large, green hands with two black lines on its palms. It has thick green legs with a black circle on the underside of its feet.

Female Ludicolo have thinner stripes than the male.

Ludicolo becomes more powerful when it hears festive music and will appear near laughing children on hikes. As it becomes more energetic and active, it will break into a dance.

Ludicolo lives near the water's edge.

Ludicolo may be based on a duck or platypus, a colocynth or pineapple. Given its poncho-like body hair, sombrero-like head, and association with dance and music, it may also be based on a Mexican dancer.

Ludicolo may come from ludic (aimlessly playful) or ludicrous (absurd) and colocynth (a plant with green and yellow fruit). 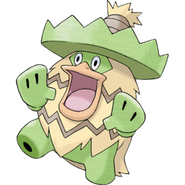