Mankey is a Fighting-type Pokémon.

It evolves into Primeape starting at level 28, which evolves into Empirilla when leveled up holding a Jungle Crown.

(From Bulbapedia) Mankey is a primate Pokémon, similar to a New World monkey. It is a bipedal Pokémon with a round body covered in whitish, shaggy fur. Its nose similar to a pig’s snout, and it has red eyes and triangular ears with brown insides. Mankey's hands, two-toed feet, and the tip of its curved, prehensile tail are brown.

Mankey specializes in physical fighting, and is very aggressive and short-tempered. When angry, Mankey begins shaking and its breathing turns rough. Its rage peaks quickly, preventing its victim from being able to flee.

Very short-tempered and prone to going berserk when enraged. Signs that it is angry include shaking and rough breathing. However, at this stage it is already too late to flee.

Mankey lives in treetop colonies, and if one becomes enraged, the whole colony rampages for no reason.

Considering its pig-like nose, long tail, and overall personality, Mankey have much in common with baboons. 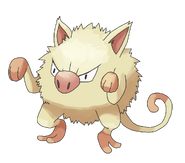