It evolves from Orchynx starting at level 28. It can Mega Evolve into Mega Metalynx using the Metalynxite.

Along with Archilles and Electruxo, Metalynx is one of the final forms of the Starter Pokémon of the Tandor region.

Metalynx is a heavy, average-sized feline creature that produces metal armor to protect certain parts of its body. These body parts include its left front leg, back right leg, right ear, and tail. It has a dark green body with light green stripes on its feet, tail and forehead. Also, it has a pattern of yellow flower-like rosettes drawn on its back. Tufts of white fur line its cheeks. Its most prominent feature is its huge razor-sharp tail that has a crescent moon shape. Many Tandorians call it the "Guillotine Pokémon".

As Mega Metalynx, its body becomes larger and the metallic plates on its body slightly change shape, with the spikes on its legs becoming large blades, its claws increasing in length and its tail changing shape to become straight, and larger. Also, its right ear is now completely encased in metal. The white tufts of fur on its face have now become a large mane, and it grows two large, metallic tusk-like fangs on its upper jaw.

Metalynx can release various poisonous or paralyzing powders; however, its main weapon are its claws and large, guillotine-like tail. It can also release energy attacks from its tail. It is theorized that the energy is released from the hole in its tail. Wild Metalynx are extremely rare. There aren't many Orchynx in Tandor to start with, and the few that are present have problem evolving in the wilderness. Metalynx can be very fierce when threatened, and they will try to scare their enemy off by showing their sharp, shiny metal tail and claws. Metalynx live in large, secluded forests and usually stay on the forest floor since they're too heavy to climb trees. They hide the Orchynx of their pack on bushes and trees.

Metalynx is based on a lynx. The flowers on its fur resemble the spots of a jaguar or leopard.

Metalynx is a combination of metal and lynx. 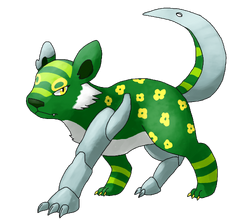 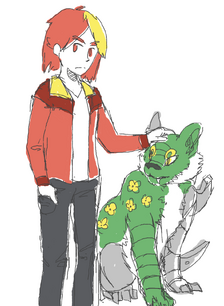 An older Theo, c. age 16 and a Metalynx by Involuntary-Twitch. 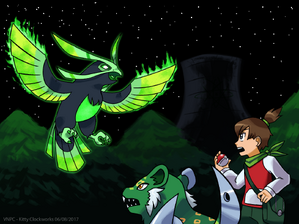 Credits artwork
Add a photo to this gallery
Retrieved from "https://pokemon-uranium.fandom.com/wiki/Metalynx?oldid=74191"
Community content is available under CC-BY-SA unless otherwise noted.