Minyan is a dual-type Dark/Poison Pokémon.

It evolves into Vilucard through use of a Dusk Stone.

Minyan's arms are usually clutched around its body, using its wings like a vampire's cloak. It has a long furred tail and rounded paws, giving it both batlike and catlike features.

Minyan is based on vampire bats, with some feline features such as its tail. It is also based on mythological vampires.

Its title as "the tiny master of evil" could be a shout-out to Veigar, a character from League of Legends who shares the exact same title.

Minyan seems to be a corruption of minion. It also contains nyan, the Japanese onomatopoeia for a cat's meowing. 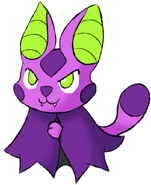