It evolves from Eevee starting at level 20 while the player has a Nuclear-type Pokémon in their party.

Nucleon has a sleek gray body with four slender legs, each with a green three-toed paw. It has three light-blue eyes. Its muzzle and underbelly are white, and its tail and ears are slender green triangles detatched from its body. It has an ionising radiation symbol on its chest with three detatched green triangles, giving it the appearance of a bow-tie. Nucleon remembers the bond it had with its trainer and thus does not go feral upon evolution from an Eevee. The symbol on its chest can also fire out gamma rays which it defeats its opponents with. They are usually only found in urban areas under the care of trainers, though they can be occasionally seen roaming near irradiated landscape.

Each one of Eevee's evolutions are based on the same design but are made to resemble their type. Nucleon has a third eye on its forehead, a characteristic mutants are often depicted with in fiction.

Nucleon comes from nuclear, nucleus (the center of an atom), or nucleon (one of the particles found in the nucleus) as well as Eon (an immeasurably long period of time, presumably in reference to the concept of evolution). Eon is also a suffix shared by all Eeveelutions and was Eevee's prototype English name. 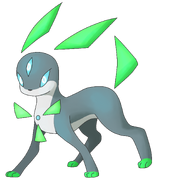 Official art of Nucleon by Involuntary-Twitch