Nupin is a dual-type Grass/Electric Pokémon.

It evolves into Gellin starting at level 35.

Nupin is genderless, it can't get any of the Egg Moves listed through natural means (unless learnable elsewhere such as via a Mystery Gift event, TM, and/or Move Tutor).

Nupin is based off of a single-celled organism, possibly an amoeba or a bacteria. It may also derive from phytoplankton, considering its Grass typing and photosynthetic abilities.

Nupin may be a combination of Nuppi (Finnish for button), Nupa (Javanese for mushroom) and pin. 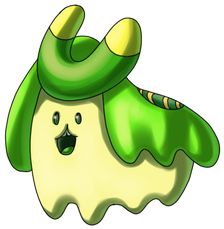