Pahar is a dual-type Fire/Flying Pokémon.

Pahar is a small bird Pokémon that resembles a parrot in appearance. It has a red body and yellow feathers on its wings. Its beak is yellow, and it has white patches behind its eyes. It has long feathers on its head and tail and a flame marking on its chest.

Pahar can breathe fire. They can also learn how to impersonate words and phrases from humans.

Pahar are smart, curious Pokémon that are generally well-mannered and easy to raise. They can be quite loud however.

Pahar form large flocks in the wild and are known for their large cross-region migration patterns. They eat fruit, nuts and insects.

Pahar is based on a parrot and includes elements of a phoenix. Its crest indicates it may be based off of a cockatoo, while its red and white colour scheme is similar to an eastern rosella or scarlet macaw.

Pahar's name comes from an anglicization of the Spanish word pájaro, meaning bird. 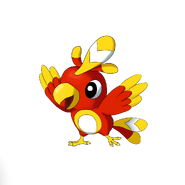