View source
watch 02:05
Wiki Targeted (Games)
Do you like this video?
Play Sound

It evolves from Palij starting at level 36. It is the final form of Pahar.

Pajay is a large bird Pokémon resembling a cross between a parrot and a bird of prey. It has a red-feathered body with green feathers on its wings, a white beak and facial mask and long, multicolored plumes on its head and tail. Its wings are constantly trailing fire, and it has two fire streamers that trail behind it as it flies.

Pajay can fly for great distances without getting tired. Their fire abilities are highly advanced, making them skilled in battle. They are also intelligent Pokémon and can mimic back sounds very easily.

Pajay retain their pre-evolution's intelligence but are in fact quite vain Pokémon that are constantly preening themselves. However this is because their beaks secrete a fire-resistant substance that they must constantly use to coat their feathers in order to prevent them from burning.

Pajay are migratory Pokémon that travel thousands of miles each year. A solitary Pajay leads each flock of Pahar and Palij. They prefer warm, tropical regions with lots of fruit to eat. They can also catch and eat bugs. 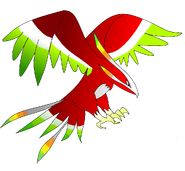 Pajay is based on a both a phoenix and a parrot.

Community content is available under CC-BY-SA unless otherwise noted.