View source
watch 02:53
GTA: The Criminal Enterprises - The Loop
Do you like this video?
Play Sound

Primeape is a Fighting-type Pokémon.

It evolves from Mankey starting at level 28, and evolves into Empirilla when leveled up while holding a Jungle Crown.

(From Bulbapedia) Primeape is a bipedal Pokémon with a round body covered in whitish, shaggy fur. There is usually has a stress mark on the left side of its forehead, and it has triangular ears with pink insides and a pink, snout-like nose. Its arms and legs are brown and have metal shackles on the wrists and ankles. This is probably indicative of a method of training with weights. The hands have no visible fingers, instead resembling mittens or boxing gloves, and the feet have two toes.

Primeape is easily angered; even the slightest glance of eye contact will make it furious. When Primeape is furious, its blood circulation is boosted. This makes its muscles stronger, but at the cost of some of its intelligence. It will chase anyone who upsets it and will not stop until it has caught its quarry. Even if it is awoken from sleep, it will groggily chase whatever woke it.

Very short-tempered and prone to going berserk when enraged. Signs that it is angry include shaking and rough breathing. However, at this stage it is already too late to flee. It is not very intelligent however, and gets even less intelligent when it flies into one of its signature berserk rages.

Primeape can be found in vibrant forests or on mountains.

Considering its pig-like nose, its coloring, and tendency to fly into a rage if eye contact is made, Primeape has much in common with baboons.

Primeape may be a combination of prime and ape, as well as being a pun on primate. 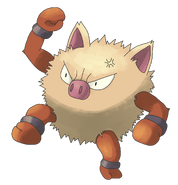