S51 is a dual-type Psychic/Steel Pokémon.

S51 appears to be an extraterrestrial being. Its form is composed of a metallic disk-shaped body with a pale green head poking out, which has two small black eyes and tiny ear-like shapes. It has two purple appendages hanging from underneath it, acting as its arms.

One feature in particular stands out when observing S51, and that is their ability to hover. They can also fire a laser that can deal Fire, Ice, or Electric qualities (Laser Pulse).

S51 are shy creatures that flee at the first sign of being discovered. They are fast and have been known to teleport (Ripley's Sidequest). They have been shown to respond to and obey their evolution, S51-A.

S51 is a Pokémon rumored to originate in outer space. Its actual origin and habitat is unknown.

S51 is genderless, it can't get any of the Egg Moves listed through natural means (unless learnable elsewhere such as via a Mystery Gift event, TM, and/or Move Tutor).

S51 is based off an Unidentified Flying Object (UFO) of the standard "flying saucer" variety. Its green body likely references the idea of "little green men". 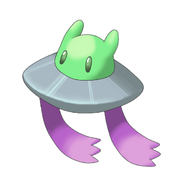