Swabone is a small, mainly purple humanoid Pokémon. Its left arm and hand are entirely skeletal, with 4 pointed fingers on its hand, while its right arm is purple like the rest of its body. In place of its right hand is a small hook connected to the arm by a red cap-like object. Four small rib-like bones are attached to the sides of its torso, two on each side, and it has two claw-like toes on each foot. It wears a red bandanna, slightly torn at the ends, around its neck. Two small fangs are visible sticking out of its mouth, signifying an overbite, and it wears a smooth, cartoony skull with four rounded horns on the back. Both of its eyes bright blue in color.

Swabone is a favorite Pokémon of pirates, and the bandanna it wears shows which crew it belongs to. It has an affinity for treasure, hoarding any gold and jewels it comes across.

Swabone is based on a ghost pirate. It is possibly also based off the canon Pokémon Cubone.

Swabone is a combination of swash (the edge of a wave after it has crested onto a beach), swashbuckle or swashbuckler (in reference to a heroic and idealistic protagonist who wields a sword, a character archetype common in works involving pirates), swab or swabbie (a somewhat derogatory term for a sailor, from "swabbing the decks"), and bone (referencing its overall skeletal appearance). 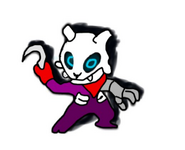