Tonemy is a Poison-type Pokémon.

It evolves into Tofurang starting at level 20.

Tonemy is a small, ball-shaped Pokémon with two stubby feet, two wings, and a furry tail. It has round black eyes and a happy expression. It has a tuft of brown fur on its head. Its body and wings are purple, and the webs on its wings are brown.

Tonemy's primary function is acting as a nuisance to traveling trainers, poisoning their Pokémon and wasting their items. They are poisonous and will use their poison on any aggressor without hesitation. While this poison is not fatal, it is very painful if left untreated.

Unlike many other Pokémon, Tonemy are seemingly drawn to humans, swarming en masse whenever a traveling trainer enters their habitat. Although they have a few tricks, they are generally weak and easily disposed of.

Tonemy dwell within caves, nesting among stalactites. They are herbivores and primarily eat cave mushrooms.

Tonemy is based off the creature from the song The Purple People Eater.

Tonemy is a combination of toxic and enemy.[1] 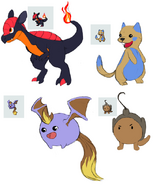 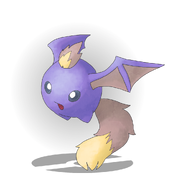