Tubareel is a dual-type Water/Dark Pokémon.

It evolves from Tubjaw starting at level 34.

Tubareel is a long, eel-like Pokémon that shares similarities to fish and sharks. It has a medium-dark blue body, with dark blue fins running along the top and bottom  of its body. It has green diamond-like markings running along either side of its body, and has dark blue fins near its head. It has sharp green teeth and green diamond-shaped patterns around its eyes, which are black, with blue pupils.  For a Pokémon of its size, Tubareel seems to have an incredibly narrow body.  Despite this, Tubareel are very strong swimmers, and very agile in the water. These Pokémon are especially vengeful towards humans and will purposefully attempt to rip fishing nets with their teeth, however the reason for their vengefulness is unknown.

This Pokémon is known to try rip fishing nets on purpose. This behavior has been regarded as an act of vengefulness towards humans.

Tubareel appears to be based on several species of deep sea fish and sharks. In particular, it may draw largely from the frilled shark, an eel-like species of deep-sea shark.

Tubareel is a combination of the Portuguese word for shark, tubarão, and eel. 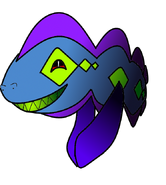