Urayne is a Nuclear-type Legendary Pokémon of the Tandor region. It changes forme depending on the amount of fuel and power it has left. Alpha forme is its weakest forme, while Gamma is its most powerful. Beta is its most prominently featured forme during the story, and is also featured on the game's title screen.

Upon receiving Urayne in the events of the Tandor Championship, Urayne will be in its Alpha forme holding the Uranium Core. Removing the Uranium Core will allow it to be used from the Key Items menu to switch Urayne between Alpha and Beta formes in current versions.

Urayne is a biological machine living off radioactive metals. It is a man-made Pokémon that has the power to split atoms. It requires radioactive fuel to function, or else it enters a dormant state and eventually dies. All of its forms have a green and black body, light blue eyes, a power core in the midsection and an antenna on the top of their heads. They also have green rings coming from underneath their body, as they are all hovering.

Alpha Urayne is a small Pokémon with two little green arms and small black fingers, a little green ring mark on its head and a single nucleon orbiting its antenna. Its power core is a simple light-blue spot, and there are 2 small hover rings, circular in shape.

Beta Urayne is a relatively large, bulky Pokémon with a large green armor pad wrapped around its shoulders, another armor plate on the bottom of its body and two long thin black arms with large green hands with a black spike on the wrist and stubby black fingers. Its armor pads all have light blue veins of energy on then, and it has two eyes like its Alpha form and has two nucleons orbiting its antenna. Its energy core is a light-blue spot and small green markings symbolic of the radiation given off, and there are 3 large hover rings which are also circular in shape.

Gamma Urayne is an incredibly huge, angular Pokémon with a large green body and black armor (the inverse of the other two forms) and two large green floating hands, each with five green claw-like fingers and three green spikes protruding from the back. It has floating green masses in the shape of a large pair of wings near its shoulders and a large blue energy core in its mid-section, with many green waves coming off of it. Its armor, wings and hands have the light-blue energy veins its Beta form does, and it has six eyes as opposed to the two eyes of its other forms. It has three nucleons orbiting its antenna in an irregular shape, and this shape is mirrored by its singular, large hover ring.

Although originally unstable and in constant need of nuclear fuel during the events of the main story, Urayne becomes stable thanks to a stable energy source courtesy of Actan. After this point, it regains its initial timid personality and is capable of communicating with others via telepathy.

Urayne is a man-made Pokémon. For approximately 10 years, it lived in stasis with its master to escape the aftermath of a nuclear meltdown.

This form is unobtainable in the current version and only appears at the Tandor Championship under the ownership of CURIE. Base stats were obtained via data mining. 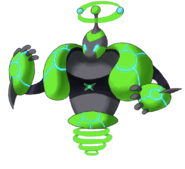