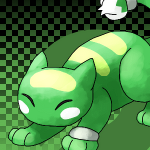 Hi everybody! I'm Involuntary Twitch, and I'm the Creative Director of Pokemon Uranium. I'm responsible for making the sprites for the fakemon, trainers, overworlds, cutscenes, and pretty much everything else that isn't made by Nintendo. I also write the story, the the in-game dialogues, help plan the movesets and stats for the fakemon, design a majority of the fakemon, make promotional art, and run the Pokemon Uranium Tumblr and Twitter.

I was formerly community manager of this wiki, however I have stepped down. All questions regarding the current state of this game or the wiki should be directed to Chain_Rx instead.

You can find my art at my DeviantART page!

I run a blog called Oripoke devoted to Fakemon design and Fangames. Some notable articles pertaining to Uranium include:

As the lead Creative Director and artist behind the project, I was responsible for creating the majority of Pokemon designs in the game. Nearly every single sprite in the game (of unofficial Pokemon) was drawn by me, as well as many of the designs. The following is a list of Pokemon that I designed & sprited.

Retrieved from "https://pokemon-uranium.fandom.com/wiki/User:Nageki?oldid=49524"
Community content is available under CC-BY-SA unless otherwise noted.