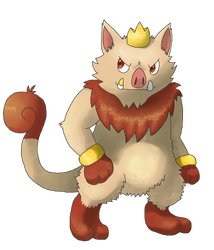 Contributing hardcore to the wiki since 15 days ago -Prosuges

I'm just putting up a list here instead of commenting on every article. (These aren't change to be made in the articles, they're things I feel should be changed in the game

Teams based around a certain theme. I don't have any of these Pokémon yet (some aren't even possible), I'm just using this as a planning sort of thing. "100" is just a placeholder for the level.

AKA the Atom Bomb team-I’m surprised people don’t abuse explosion on Nucleon more often! Intended mainly for double battles, but a single battle could work as well-though the A-bombs oughta have some more moves in that case!

Urayne’s mostly there for the Fallout and Quantum Leap-if mine ends up not suiting this team (and it pretty easily could), I’ll just get a Xenoqueen to stand in with Protect.

Other Wikis I'm on

(I mean, you read this far through my profile, I guess this might interest you?) Italics are wikis that are pretty early in development-you can take this to mean "This wiki could use some help!" or "This wiki isn't actually going to help you much don't come here yet".