Please note: None of these images are mine. The artists are credited with the images, along with links to where their original post can be found.

Additionally, if any of the artists aren't okay with me posting their work here, please let me know and I will take your images down as best I can!

I dunno about anyone else, but I tend to feel like it's easier to get involved on a smaller community like the wiki than it is on the bigger social sites like the subreddit and Discord channel. Those are more made for conversation, so a lot more happens there, and it seems like that makes it both easy to get lost with things getting pushed back easily. (could very easily just be me, though)

Anyways, I just told that to explain why I'm sharing these-I think these are really neat ideas, and I'd like to share them in a place that feels a little easier to see! (I don't know how much traffic the wiki gets vs the subreddit, but I imagine there's some other people like me that might miss these otherwise)

So, overexplanations aside, here they are! 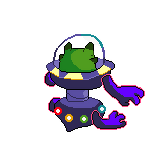 Swampat's done some really nice sprites for the unreleased Megas! They're also looking for inspiration for their next sprite project according to their Daikatuna thread (last comment), so send them an idea if you'd like! (Links: Daikatuna, S51-ABack, S51-AFront)

Tee_Hee tends to do Megas for Pokémon that don't already have one, and they do a great job! I'm not sure of the legitimacy of this claim, but raindrobs posted on the Mega Astronite page that they had forwarded it to the devs, and they were considering adding it-Fingers crossed!

Okay, it's not a Mega, but this is still really cool-animated sprites really put the cherry on top of fangames, and they take a lot of work! Sadly, Androziel said on their thread that it won't work with Uranium as a GIF (I've tried with HyperactiveFlummi's Owten and can verify it gets pretty messy), but maybe it'll make its way into the frame-by-frame like the others!