Spectreon is a Ghost-type Pokémon.

It evolves from Eevee while holding a Dawn Stone at dusk.

Spectreon is a ghost of the Pokémon Eevee, often long-dead and abandoned by their abusive or inexperienced Trainers. Its once cream-coloured mane has become somewhat dishevelled, and brown with dirt it uses to keep itself protected and warm. Much of the fur from its tail has thinned and matted together, making it significantly stronger, thus improving its balance for climbing, grasping and attacking. Spectreon's ears are much taller and pointier than Eevee's. Eye colour differs between genders. Claws are beginning to develop on its feet, which have in themselves grown larger with more leathery pads. However, due to them being shunned socially, there is very little pubic knowledge of Spectreon's appearance. Given that it can possess any Eevee almost impeccably, there are many disputes over whether it exists or not. Mark is the only person alive to have observed Spectreon taking any host body other than an Eevee.

From birth, all Spectreon have the ability to possess unconscious Eevee, and its evolutions. For some reason, Spectreon have not yet been known to inhabit a shiny Pokémon.

Spectreon are excluded from the normal functioning of society due to its ghostly, often terrifying appearance. This often leads to them becoming resentful of their original trainers for allowing them to die. Spectreon often send their foes to sleep so that they can attempt to possess them more easily.

Spectreon live among humans, in towns and cities alike, often disguised most commonly as Eevee. Dependant upon age and experience of disguising themselves, some Spectreon may remain inside their host bodies for years undiscovered. 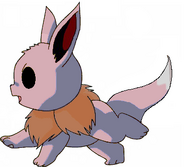 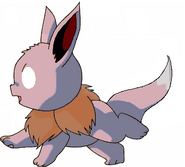 Prior to the revelation that they could breed, the first Spectreon came from dead Eevee. Mark is the only trainer who can distinguish ordinary Eevee from possessed Eevee at a glance, due to his years of having run a Spectreon Sanctuary.

Spectreon is a combination of spectre or spectral, and eon, the standard name suffix for all evolutions of Eevee.