The Vinoville Town Gym is the fourth gym you will visit in the Tandor Region. It is the home of Gym Leader Sheldon, who specializes in Steel-type Pokémon.

The Vinoville Town Gym is composed of a series of platforms connected by invisible pathways and a basement level. Stepping off of the invisible pathway will drop you into the basement level where several of Sheldon's Junior Trainers are waiting to battle you. Pushing a button on the lamp posts scattered across the platforms will release a pulse of light along the hidden pathway.

To reach Sheldon, push the button on the lamp post on each of the first two platforms to get to the next one. You will need to carefully and quickly follow the burst of light illuminating the walkways before they turn invisible again.

Once you reach the long pathway with Guitarist Slash, you will see three possible pathways. Take the left and right paths, using the lamp post next to each, to get to two final platforms. When turned on, the lamp posts in these final room will turn red. Turning both lamp posts on will illuminate all of the hidden pathways and activate the final path to the battle with Sheldon. 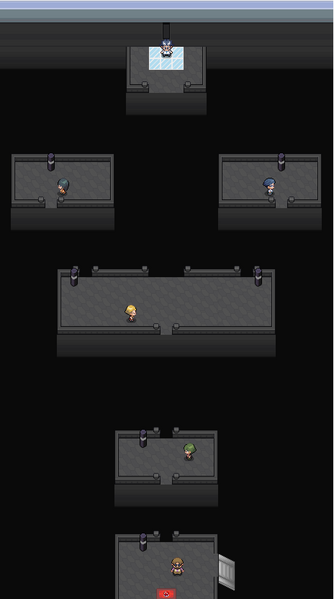 If it weren't for his parents, Sheldon would never have come back to Vinoville. Sheldon loves the flash of technology and the excitement of the city - things that the slow, rustic, and faithful Vinoville completely lack. To make up for his boredom, Sheldon spends his time terrorizing the populace, particularly Ripley, whose family owns the wheat fields on Route 8; Sheldon was the one responsible for the trouble in Ripley's Sidequest. He also has a rare S51-A, but he doesn't use it for his battle against you in the gym, even if you beat it before-hand.