It evolves from Voltasu starting at level 66. It is the final evolution of Volchik.

Yatagaryu has an elongated, serpentine body covered in scales and feathers. It has three birdlike legs; each of its feet has four toes tipped with red talons.

Male Yatagaryu sport moustache-like feathers at the corners of their jaws. Female Yatagaryu have markings similar to eyelashes on their upper eyelids.

Yatagaryu can summon storms at will.

According the Tsukinami Museum, Yatagaryu are sacred to the Ninjas clans and are often depicted fighting Coatlith. As shown with Cameron, Yatagaryu can be very loyal and heroic.

Yatagaryu is based on the Japanese mythological creature Yatagarasu, the three-legged crow. It also seems to be based partially on Asian dragons, given its shape, typing, and powers.

Yatagaryu is a portmanteau of yatagarasu (three-legged crow from Chinese/Japanese mythology) and ryu (Japanese for "dragon"). 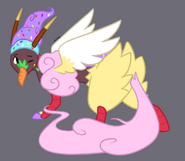