It is not known to evolve into or from any other Pokémon.

Zephy currently has not been officially released.

Physically, Zephy heavily resembles both Articuno and Plusle. Zephy is a bipedal, rabbit-like Pokémon with a cream-colored head, upper torso and belly, and icy blue legs with bluish gray talons for feet. It has red ears, red cheeks and paws, and unlike Plusle, large blue eyes. It also has a small black nose, and fluffy white fur on the top of its head and around its neck. It has a fairly long blue ribbon-like tail, and blue wings with white centers that sprout from its lower back. Zephy is a female-only Pokémon with no male counterpart.

Zephy is often told of in legends, where it gave many artists ideas for their next masterpiece.

Zephyr is based on an old design by Twitch, one of the developers of the game. Appearance-wise, it is inspired by both Articuno and Plusle. (4)

Zephy is a corruption of Zephyr, which was the name Twitch gave to its original incarnation (5) The definition of zephyr is "a light breeze or the west wind". 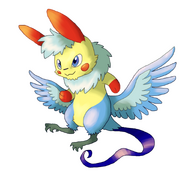